I know the 1900’s were not all bad but if you were female and wanted to be accepted as an equal, work in similar fields like men and earn equal pay it was not a great time for you.

However you could mistake our current time for having the same issues. Yes crazy right?

In the news just today was a report about a senior female surgeon, Gabrielle McMullin, who told trainee female doctors that it is best to have sex with a male who harasses them, as it is easier than not having a career at all. Why is this acceptable to tell trainee female doctors that this is okay! Why is a woman telling other women that this is a good way to advance your career? Just shameful and horrible in my book! 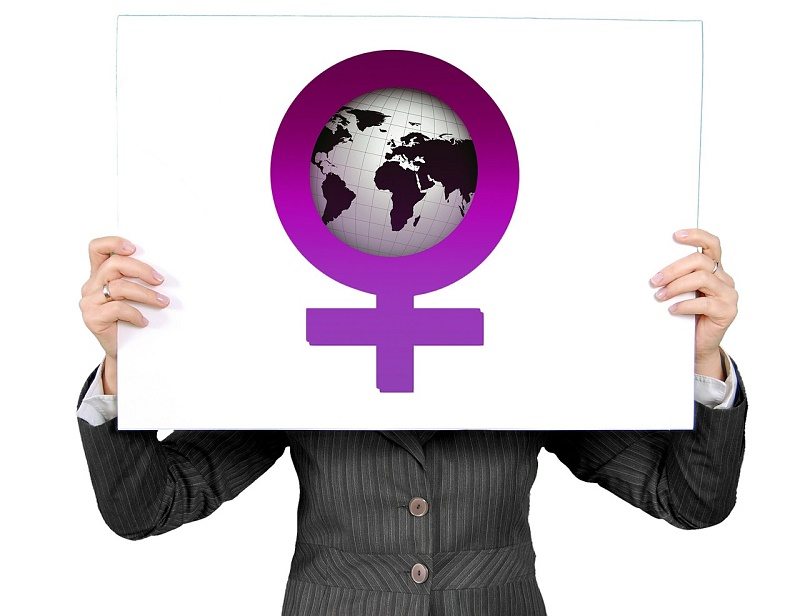 Happy International Women’s Day. How do you celebrate?

“Dr McMullin referred to the case of Dr Caroline Tan, who won a 2008 sexual harassment case against a surgeon while she was completing surgical training at a Melbourne hospital. Dr Tan was vilified and has been unable to find work at any public hospital in Australasia despite the legal victory, she said.”

If someone harasses you and puts the hard word for sex, you have every right to say NO! Saying no and not engaging in sex, or anything should in no way impact your career or your person.

Below are more quotes from the Sydney Morning Herald article:

“Her career was ruined by this one guy asking for sex on this night. And, realistically, she would have been much better to have given him a blow job on that night,” Dr McMullin said in the criticised ABC interview.

“What I tell my trainees is that, if you are approached for sex, probably the safest thing to do in terms of your career is to comply with the request; the worst thing you can possibly do is to complain to the supervising body because then, as in Caroline’s position, you can be sure that you will never be appointed to a major public hospital.”

I am not sure if Dr McMullin was just stating the facts that the work place culture is so bad that it has allowed this sexual harassment to be tolerated and not reported. I do understand that women don’t report crimes due to wanting to progress in life and their careers, however this does not help anyone. It keeps the perpetrator in the environment to strike again. The cycle just repeats itself.

I’m also at a loss to why a female surgeon would be teaching this to young female doctors. She is helping this terrible culture of harassment to continue by allowing this to be accepted. If more people stood up to these men who feel they can manipulate and dominate others, the culture would not allow the silence on these terrible incidents.

Why is it okay to let women or young girls be used sexually in order to gain in their career? Sex should not be a tool to be played with, and it is actually irrelevant in the role as a doctor and other careers as well.

Being female should not make you a target and silenced. This needs to change and NOW! Not later!

As said in my introduction; We are living in 2015 not in the 1900’s so why oh why do women still get underpaid for the same job a man does? Are we living hundreds of years ago? Are there laws to make sure there is no discrimination, Yes there is! However I am not sure how this is applied to equal pay as it does not seem to be happening. If it was, pay would be equal and my rant would be for nothing.

Many women are highly qualified, can do an excellent job and match or can outdo the competition. Fair pay for fair work I say! So why are women still being short-changed? Is it that we are too nice? I have heard that it is due to the fact we have babies and go on maternity leave. I personally don’t see how the possible thought that a woman might have a baby or not make her earning potential drop. Some women never have children and some do.

How about this for size, women live longer than men so we need the money! Pay us more so that we can invest in family, and the economy. If we had more savings for retirement maybe many women would not have to be on the pension due to struggling with little savings. Now there’s a thought! More money in the pocket would help women and society! Easy really, right?

Is the issue due to the fact that we don’t negotiate well enough? Or is it that corporations feel that they can get away with underpaying women and making more money off our brilliant and fabulous skills. I am not sure why it is still happening.

I for one am very frustrated about this. However how do you find out what others are getting paid and men who do the same job? I doubt they will tell you what they earn and many organisations have a private policy in place to protect this information. So due to all the secrecy you are flying blind.

You can do your homework for your industry and negotiate but that is about it. Do you think we should have more transparency on salaries? I do. If we were more open about what role gets paid what, women and also men would know what is fair and equal.

Did you know that?

• Gender pay gap will not close for 70 years at current rate, says UN
• The gender pay gap in Australia is now greater than it was in 1985 despite 30 years of the Australian business community working towards equal opportunity for women, according to the Diversity Council of Australia. 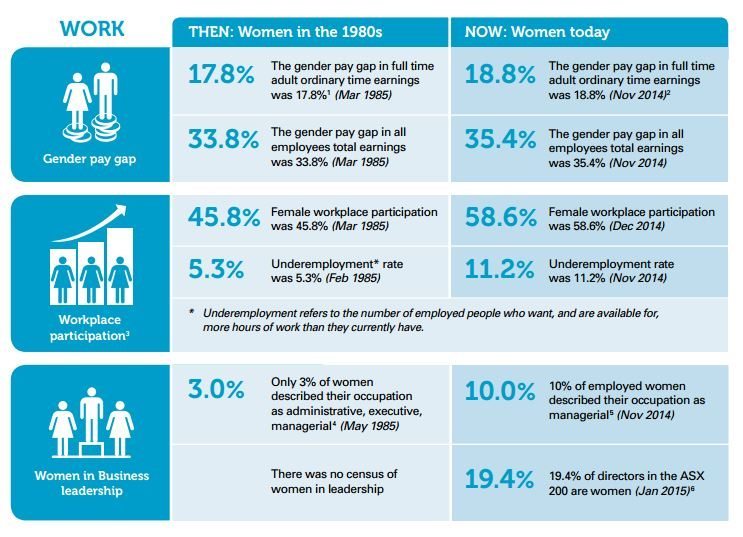 earnings for women in 1985 and now. From http://www.probonoaustralia.com.au/news/2015/03/australian-gender-

Why does it feel that we have come so far, but still not far enough. I still don’t understand why underpaying or harassing women helps our society. If we got paid equally it would benefit everyone. The money goes back to the family and helps fund education, feed everyone, put a roof over peoples heads and much more.  It also shows that women are valued for their contribution and skills.

Why are women still penalised for being a mother and the caretaker? These unpaid roles save society a lot of money, it is mainly women caring for kids, elderly and the sick without getting a cent or nearly anything for this service.  It is a massive saving to families and society. Fancy us sending a bill for our work. I am due over six years back pay! Bring it on!

Since today is International Women’s Day we can address these issues or put more thought into why they occur. It would be nice if the heads of companies and the like address the fact of equal pay and strive to make their workplace a harassment free environment. No woman wants to work in an environment that has a horrible culture and also underpays women, they will go elsewhere where they are valued.

When will people wise up to treating women as equal helps everyone. What do you think? Send in your thoughts.

Fitting Exercise Into Your Day