The other day I purchased a quick pick in the Powerball. It was at about 25 million if you won or something like that. I purchased it due to it being such a big win and I felt lucky that day. Also it has to be won by someone so why not let it be me. I know there is a lot of others in it also but you never know right? One day it has to be me!

I waited a day or so and went back to the newsagency to get the ticket scanned to see if I won anything. I did not think so, but best check just in case. I would hate to throw out a winning ticket. 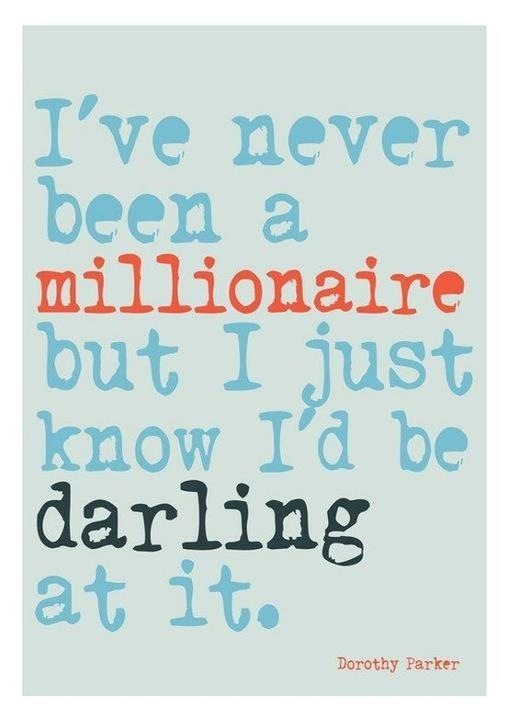 I am sure I would be a success being a millionaire. What about you? Image from Pinterest.

When I handed my ticket to the man behind the counter I mentioned, I was not sure if it was a winning ticket and was just checking. I did mumble to him that I did not think so. He scanned it and before he got the words,”No it isn’t a winning ticket” out of his mouth, he had ripped it up and put it in the bin.

It was a bit of a shock that it was that quick to kill my dream of winning millions in a blink of an eye. On the walk to the newsagents I still had my fantasy of winning big, but deep down knew it might not be so.

I mentioned it to hubby and he said at least you know it was not a winning ticket if he ripped it up. Yes that is right. I am happy the man at the newsagents is not secretly keeping it to himself.

I think it is a nice idea to have a little hope. That hope is going into lotto, competitions and all sorts of luck games. You never know what might happen if you do. You might win and get an amazing prize and experience.

What do you enter to keep some hope/fun/fantasy alive? Is it the lotto? Let us know. As said someone has to win it. If you are not entered to win, you will never have a chance. Send in your comments.