Today the kids and I watched “The Croods”. The film is about a caveman family. The family does not have much fun as the father (Grug) who is voiced by Nicholas Cage makes them stay away from fun, live in a dark cave, and stay away from possible trouble and threats. Basically, everything was a threat to them so no need to stress the importance to hide in a cave. 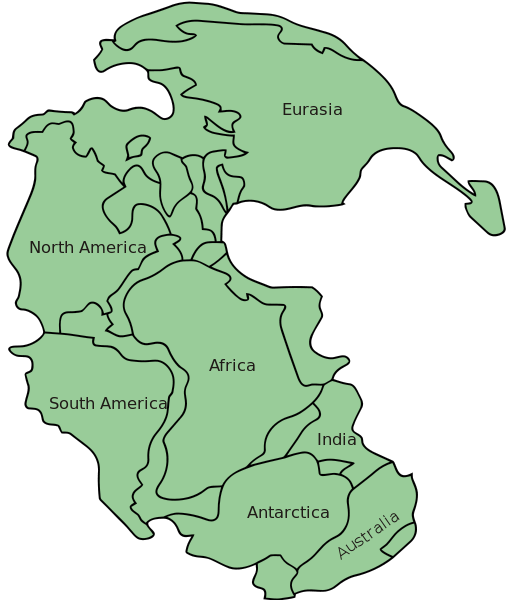 Pangea map, with names of the continents. Image of pangaea made by en:User:Kieff.

Eap (voiced by  Emma Stone) the daughter of “The Crood Family”, cannot take being caged in darkness anymore and goes out on her own to investigate some light that she is curious about. It ends up being a boy called Guy (voiced by Ryan Reynolds), this character seems more advanced than the cave people of the Croods and has wonderful ideas and has figured out fire and how to make it.

Guy tells Eap that the earth is changing and soon they must leave the cave to go to higher ground. It sounds weird but I had all sorts of strange thoughts while watching this film:

Am I the only mad mummy that thinks like this while watching a kid’s film? I hope not!  I must say that the film was enjoyable and got the twins asking questions about why the earth was moving and causing such problems. I responded that the earth is shifting and moving into other places. I did say it was a continental shift but that was lost on them.

I am going to show them some maps and things online to explain more about the film. This great site from thinkquest shows the Pangaea Theory with great images to help understand where the landmasses (countries and continents) went. Another great site to help explain is Kidcyber.com.au and they have some great illustrations to help kids understand more.

It is good to see a film making kids question things in history and allows parents to explain such complex ideas simply by a film that is fun for both child and adult alike. Have you enjoyed watching “The Croods?” I did and now kids are loving it so much they want to see it again and again.

House Plans Are Hard to Do