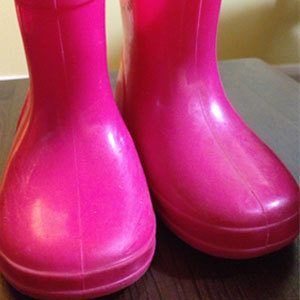 In the news recently was a story of a little boy who for his first day of preschool he wanted to wear pink shoes. His mum explained that the shoes he was so taken with were meant for girls and he did not care. The mother decided if he was not fussed, then why not let him wear them.

It was not until the mother posted the innocent picture of the boy dressed ready to go to school on her Facebook page then family and friends suddenly had issues with her decision.

The boy who is only five years of age, said “”ninjas can wear pink shoes too.” So he obviously does not have an issue with colour and was okay with the shoes. Why is it that we as a society have ideas and thoughts on what kids or others should do or wear?

Children don’t see what adults see and to the child pink is a colour and has no meaning on being girls or boys. My girls play dress ups and have worn some most outrageous things to preschool. I have not let it stop them and their creativity. If I was to do the same thing to my girls then they by rights they should not have work boots, I must say that they are coloured purple but I did try and find the brown ones like daddies.

The only people with a problem about this were the adults, the child and immediate family were fine. In the essential kids article it stated that other kids at the preschool thought the shoes were good and even had many positive comments on them. According to the child’s mother, no negative comments were made about it.

Have you been in this situation? Your son wants to wear pink shoes or something that is meant for girls? Did you let him wear it and if so how did it go? When I was still pregnant with the twins, we decided not to find out the sex. In the classes at the hospital we were put in groups and asked if we had a boy would we dress them in pink or have pink in their wardrobe at all; my hubby was the only man to walk with me and other ladies into the yes side of the room. There was more in the no side of the room if that gives you any indication on what the leanings were towards.

I think you need to give your child a chance to express themselves and to explore dressing up and having fun. Imposing your ideas on the situation is not a great thing to do, the poor family has had to endure comments “the harshest of which came from the boy’s great aunt, who wrote “that sh*t will turn him gay”.

I believe that ninjas can wear pink and any other colour for that matter, they are ninjas after all. Telling a ninja what to wear might be a deadly exercise that will not end well. What are your thoughts?

share
2Comments
attitudes of parents and family, boys can wear pink too

Do You Holiday Alone?

Teach Kids to Be Active