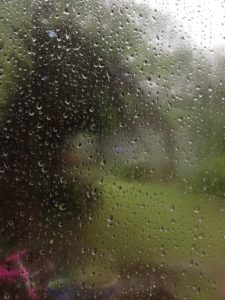 Today it has not stopped raining. It has been nice to have the garden watered and the seeds for the grass growing well, however parts of the country are flooding so I am not happy about this and would like the rain to stop now. It was nice to spend the day inside with the hubby and kids. We tidied up a bit, although the areas that I would have liked are still a mess, but I suppose with kids bored and it raining what can one expect?

So if you are in the zones for the bad weather please be careful and stay safe. The bad weather is due to ex-tropical cyclone called Oswald bringing flooding to parts of Sydney and Queensland. According to the Sydney Morning Herald article about the weather states:

“A severe weather warning has been issued for large swathes of NSW for destructive winds, heavy rain, abnormally high tides and damaging surf, with the north of the state already copping the brunt of the bad weather.” The prediction tonight is that rainfall could hit 150mm and wind speeds will get to 100km/hour so bad weather and best to stay indoors.

Bundaberg is being dealing with extensive flooding and as has Ipswich, Brisbane and the Gold Coast. So bad weather all round. According to a Courier Mail article about the bad weather it states:

“Government expecting major flood damage in Bundaberg with the Burnett River running at 40 knots – so fast that rescue by boat will be very difficult and the force of the water is such that houses could be completely washed away.”

“Premier Campbell Newman, said the velocity of the water flowing through north Bundaberg meant houses could be swept from their stumps.”

Hubby said that 40 knots is  74km/hour so that is fast water indeed.

So I am hoping that it stops raining and people stay safe. Hope you are all o.k on this rainy day.  Have you been affected by the bad weather?

Pre-School has started for 2013