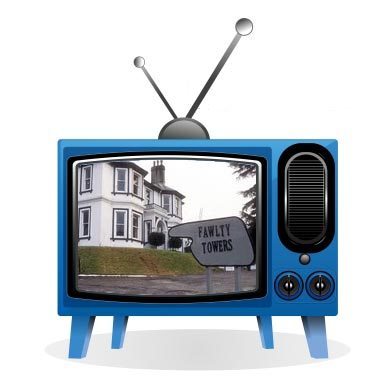 I’m sure I am not alone, getting sick of watching the same kids programs over and over again. Not other SpongeBob Square Pants, Octonauts or Peppa Pig! Please can we watch something different? Movies are stuck on the same one currently, “The Little Mermaid” Ohhhhhhhh it is hard to keep up the enthusiasm for the same show that you have seen a million and one times! Trust me it feels like this is the amount I have sat there. Insert fake smile to child here! Of course I would love to watch Peppa Pig again, Yes after that we can have a SpongeBob Square Pants.

So I decided to see if there was an old show that I like, that would be kid appropriate. I decided on Fawlty Towers. Not sure if the kids would think it funny, but I loved it as a kid as John Cleese, Connie Booth, Prunella Scales and Andrew Sachs made the characters fun, made me laugh and love them.

Fawlty Towers for those that don’t know is about a couple that run a hotel in Torquay, England.  Basil and Sybil Fawlty own and run the hotel with help from Polly and Manuel. Sybil manages to find ways to avoid work while ordering Basil around. He is a rude man that gets annoyed, angry and yells at customers of the hotel. Mr Fawlty also ends up running around in a flap trying to please the Mrs with jobs that he is supposed to have done but never gets around to, or ignores, or runs out of time due to issues with customers or the hotel.

There are many episodes where Basil loses his cool and has a temper tantrum. However it is never bad to watch, more slap stick in origin and hard to watch without laughing yourself silly and bringing tears to your eyes. Hubby and I have been in a fit of giggles that were uncontrollable and just could not stop! The show although obviously shot in the 1970’s has not lost the edge it had then, the episodes still hold up in 2013 and are just as hysterical now as they were then. Well that is my opinion.

Now you might think that this show might not be entertaining for four year olds (this was the age that I started them watching it), and now five year olds, but you are very wrong! They love it and ask repeatedly for us to put one of the episodes on, their favourite “The Wedding Party”.

While we were away we had episodes copied to our laptop for the girls to watch before bed, they giggled their heads off and so did we. Also when we were at a winery they were playing with a toy phone, and asking for Mr Fawlty. I overheard this and could not stop laughing. This has happened the local doctors, both kids were pretending they were the Fawlty’s, one was Basil and the other was Sybil. Interesting.

Now the kids ask to watch “the angry man who jumps up and down in the office” this is how they refer to Basil Fawlty. Weird how they have taken to it and glad that it now breaks up their shows with something that mummy and daddy love to watch also.

How many times do you think you have watched some of your kids shows? Is it a trillion or more? Let me know.  What show from your childhood have you introduced and they love also? The girls also love “The Muppet Show” so that is great.  Send in your comments.

Man vs Bee: 13 Reasons Why Trevor should never house sit