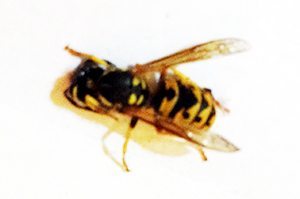 Late this afternoon Julia ran into the house hysterically saying there was a bee in her hair. She was screaming and crying, “Get it off me!” I was looking at her head moving around so quickly to see if I could see a bee and I did see something. I finally managed to get her to stand still and I successfully got what I thought was a bee, however after hubby came home we have learnt that it was not a bee but a wasp, a European wasp to be precise.

At first I thought she was having the same reaction to a fly or mozzie, but realised after short while that she was very upset and something was very wrong.

My poor little girl has been bitten about 3 times that we could see on the head by this evil wasp. We have made sure that there were no stingers left in her head, I kept an eye on her when it happened and applied a cool pack and gave painkillers that also have an anti-inflammatory action as well, so think that helped. I am very pleased that she did not have an allergic reaction and there was no more bites by more wasps. Wasps send out signals to the other wasps to come and help them attack someone or an animal so Julia could have more than one on her. Very lucky indeed.

I then spent the rest of the afternoon sitting with her as she was in a great deal of pain and very upset. I cuddled her and we watched some television shows while we also made sure to apply the ice pack.

Once hubby got home I showed him Julia’s head and told him what had occurred, he asked what happened to the bee. I told him in the panic and upset it came off and is in the study. I thought as it was a bee that since it had stung Julia then he would be dead. As it turned out it was a wasp and was very much alive and kicking, hubby rescued us from the wasp in the study and you will see it as the image for this post.

After we managed to get the remainder of the stinger out of Julia’s head and make sure the wound was clean with Dettol we asked her to tell us where she was in the yard when it happened. She showed us although while being behind daddy and standing at a great distance so not to have a repeat performance.

We have now realised that there is a nest and we need to get a pest exterminator in to remove them as a nest could have thousands of them living and breeding…what a terrible thought.

While tucking Julia into bed and kissing and giving her cuddles she told me that the wasp was a “pooh pooh!” I do agree, that wasp and the others are pooh pooh’s . It is sad that she is now scared about the yard, but until we sort out making it safe again it is off limits as wasps like to play during the day and I am not about to risk it.

My poor little girl it would have hurt like hell. I hope it is better tomorrow but I do suspect that it might hurt for a while yet. Have you had a run in with wasps? Did one sting your kids? Or you for that matter? What happened?

Doing a Jig for Air Con

There’s a bee in my ear mummy!

There's a bee in my ear mummy!