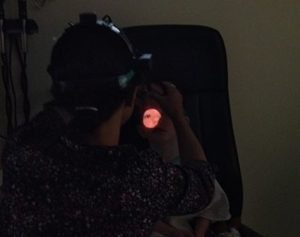 Brave girl getting her check up

Today the weather in Sydney was predicted to get to 39°C so that is 102.2°F, so very hot (and it did get to 39°C). To top it off we are having dry winds and of course it is a complete fire ban. Today also was the day one of my girls had her check up at the eye clinic at Westmead Children’s Hospital. She has great vision and sees o.k, so they are monitoring her and will go back next April.

We got up at 6am to get to our 10.30am appointment. When I got the kids, bags and myself to the car I then learned that the kids had bent my car key! Who does this? Well of course my kids. I am not sure when the destruction phase ends?  I ended up having to get a hammer to straighten it out a little bit to allow me to put the key in the door to unlock it, and then to put it in the ignition. This was a 2omin temper tantrum from mummy and asking the kids “Why did this happen?” Kids were very upset, but mummy was even more so! If I cannot use my car key I cannot use the car! Annoying, not even come close, it was more than annoying maybe other words that are not fit for print ANNOYING!

Not only was I concerned about the car key but there is a light that is coming on the dash board and not sure if it is bad or really really bad! This light came on, turned off, came on and turned off and then stayed on! Have to call the mechanic but a new car would fix it all really… oh well will call our trusty man to come check it out soon!

After mummy calmed down and finally had key in car and it was started we were off, however it was now close to 9am and as stated our appointment was at 10.3oam, I was losing faith that we would get there on time. Maybe we could do it? Would it be o.k? Not sure…. I was concerned. Appointments at this place don’t wait for late comers. They will think I just did not turn up.

You will be very amazed, I managed to get to the parking station at just a little after 10am, and then spent 1omins fighting with the car to release my car key as it is not 100% straight. I even brought along the hammer in the boot just in case I needed it. I did not, but I did not want to be at Westmead and be stuck! Lucky that was not to be the case.

All of us got out of the car and proceeded to go into the building, while we were half way there I then realised that I left the child’s blue book (the blue book is what doctors and health care professionals refer to for kids since birth. It is their medical record) in the boot also. I thought that if I needed it I could go back and get it it, as it turned out they did not need it. So good news on that front.

Arriving at the waiting room before the appointment I had an extra 10mins up my sleeve, so good going considering we left later than expected and planned for. I am going to take this moment to say, “Well done Me!” Yeah Mummy! I know I am saying well done to myself and that might appear a bit weird, but if you have had the day I had, you would say well done to you as well.

My little girl went into get her once over with the eye person that checks you before the doctor, then we went to the waiting room to wait for her to get drops put in her eyes. This is the bit I was concerned about. This girl gets upset about these types of things and I was preparing and bracing for screaming, crying and just not wanting to be still to have it done. To my surprise she was very good and brave. She laid down cuddling her Jessie doll and had the drops put in each eye. My brave little girl! I was so proud of her. I have had the same drops and they make you not see close up and you virtually become blind and need assistance. So she did extremely well dealing with this.

Off again to the waiting room we all went, and we waited to see the doctor this time. While we waited the girls sat on my lap and we watched Mr Maker on ABC for Kids. I had some lovely cuddles and my little girl who had the drops in her eyes looked at me smiling and kissed me. She then told me that she could not see very well. I told her that I was there for her and if she needed help to let me know. I told her also that I will hold her hand as it might be difficult getting to the room when the doctor calls.

Half way through the wait to see the doctor the blacks of her eyes filled all her eyes, they were so BIG! Finally after a little wait the doctor called her name and we all went in for the final check up of the day.  Her eye sight is good, and she has good vision for her age. Good to hear. The issue we went to have looked at has not really improved but they recommend look and watch and then see if other solutions are needed. So we will see at our next appointment in April 2014. I have made it in school holidays as my little girls start big school (Kindy) next year. It would be hard to get one to Westmead Children’s Hospital and get back in time to collect the other from school. Much better if I do it in the holidays, so think that will work best.

As you might imagine, since we have been up early and went straight to an appointment, kids and I were hungry when we left the doctor. The girls were complaining and asking when they were going to eat. You know the whinge! “I’m hungry”, “When are we going to have some lunch mummy?” I told them as soon as we were finished that we would stop at the cafe and have some lunch. This way they will have full bellies for the drive home. I thought that was smart thinking on my part, right? Well you would be wrong!

I ordered a cheese sandwich for one girl and the other decided she wanted cheese melts, however they cannot have it without making it sandwich. Annoying! Oh well, we ended up getting one fresh bread cheese sandwich and the other toasted cheese sandwich. The kids had an orange juice and apple juice to drink and it was a big glass. The child who had the toasted sandwich did not finish half her sandwich and the child with the fresh bread sandwich picked at it. At first she loved the cheese and then decided it was yucky. So nothing was eaten. I got annoyed as both were telling me how hungry they were, to then not eat anything! They drank all their drinks, which is not a surprise but good as it was so hot.

We briefly ventured out into the playground while at the hospital but as it was so hot did not stay long. The girls wanted to play in the sun and I did not let them. It was like a sauna and just not good for them to be exposed to the sun in this heat at all. We then left to go to collect the car and make our journey home.

Now this is where the fun starts….

I got onto the M4 and was making good time and thought we were doing very well. Then one of my girls said she wanted some water. I told her I was on a highway and could she wait until I could pull over. She said no, as she had just thrown up! I moved the rear vision mirror to look at her. She was red and looked very sick.  When I told her that I will try and pull over she then threw up twice while I watched. OH NO!

I managed to pull over on the edge of the M4 and got out to discover mess everywhere. It was over her toys, her clothes, her car seat and the car! I was a bit annoyed as how am I going to sort this out. I had no towels, no wipes or things to sort it out. I did however have spare clothes. Thank god for the spare clothes bag, and for remembering to bring it.

While dealing with my little girl in her crisis the high gale force winds upturned my dress and showed my undies to the oncoming traffic! I know disaster. I was so upset at the time I just wanted to get it all done and be out of there, but dealing with a kid that is never possible. I think I heard some honks of horns, but not sure in my upset to the situation. Maybe it was at me, or at a fellow driver not doing what they were supposed to? I will never know. I think I would like to believe it was at my bum or sexy undies. I don’t know.

Oh well, I sorted it out with the child and got her changed in new clothes, sat her on other clothes on her chair and then we were off home again. As soon as we were home, she had a shower and got changed again in nice new clothes that were fresh. I have now cleaned the car, the kids seats, toys and clothes. Phew!

To add to the list, I now find out that they have moved files or done something tricky with the file storage and computer that we watch our television off. I can now only access music and music videos, no television shows or films. I have looked and clicked on buttons and in desperation I have restarted the device to see if this fixes it. NO no such luck! Need to wait for hubby to come home so he can have a look.

I also thought that the child who threw up was done and feeling better. No, she is still unwell and has since thrown up 3 more times. Not good at all. Crossing fingers and toes she gets better.

Have you had days like this? What was the funniest thing that happened to you?

Day of the Girl

I Need to be A Contortionist