This was our Vivid experience in 2016.

We went to Vivid last Saturday night. Hubby and I had never been, either had the kids. I must say that we were rather excited about our impending adventures.

However they were dashed quite quickly. The crowds and very rude people made the night not as fun as it was meant to be.

I know we chose to go on the long weekend, we chose a weekend and you have to expect it to be busy and crowded. BUT I did not expect to be pushed at every chance anybody got. I like others were on top of others just trying to walk to the Opera House to see the lights. During this horrible walk I had many people try to walk on top of my kids, one lady in particular try and push me away from my family and I lost touch of the twins. I had to have a word with this terrible person. I told her that I don’t know where she was going but pushing people and making me lose my kids and family was not on, not in a crowd like that. 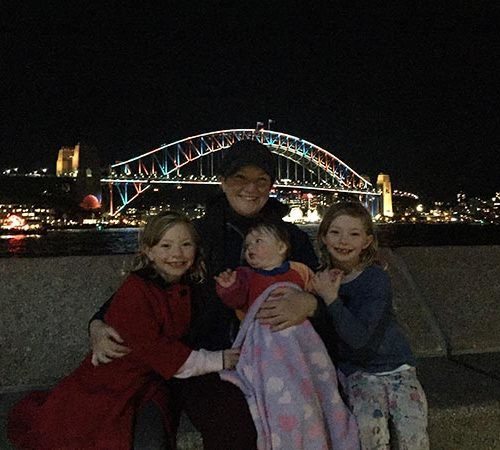 The kids and I at Vivid last Saturday. This picture was taken when we could finally move around freely and not be on top of others. It was nice to be able to walk and to sit on our own. One thing that was lovely was the amazing view and the lights. Please forgive the graininess of the photo. It was dark and hard to get a good image with the phone.

I also chatted with a lovely man who was helping his mate in a wheelchair walk back from the Opera House. He said that it was feral. People were not seeing the wheel chair and trying to walk on them also. Just chaos!

At one point hubby had to yell at a woman to watch what she was doing. Her bag just narrowly missed the babies head. Yes no one seemed to see the pram either. I think we all turned invisible that night as many people decided they could not see us. Maybe we were wearing Eric the Viking’s Cloak of Invisibility? If so it finally works!

The walkways were a free for all. I would have thought that one side would be for getting to the Opera House and the other for going back to George Street and the trains. It was not to be. Due to all this chaos the kids only experienced two hands on lightening installations at the Quay. There was no way to make it to other installations and get there in one piece. From our perspective it was very dangerous. If there was a disaster or say fire happened I’m sure we would have been trampled as the crowed would have stampeded to safety.

I do understand that this is a popular event. Sydney has many visitors and therefore this means crowds. However we picked late afternoon to early evening to make sure that we were not in the way.

How about having more control over the crowds. Having people police the crowds and monitor lines: having one side for one direction and the other for the opposite. Just common sense actually.

I’m not sure if they are doing this currently but maybe having free shuttle buses to other destinations around the city would encourage more movement of people (they did close many streets to help with access and this was a good thing to do. It was a good help and one of the only pluses of the night) This way the crowds are always moving and not staying in one spot all the time. I know this would cause other issues such as waiting for buses and other connections but maybe with frequent buses or trains this could be avoided. Or the wait would be very small compared to the possibility of being pushed and shoved to see the pretty lights.

One thing that I could not understand. Vivid closed a section of the walk way to go towards the Opera House. They then made you go back onto the road to then walk around this closed section of walk way, this meant that we were again on top of many if not hundreds of people. Once we then turned the corner we noticed that the walkway was all open once you got around the bend. Why would they close this small section to have you in human traffic chaos! Just a disaster all round if you ask me. Why not have all the walk way open to encourage people to go everywhere and to of course to not have an angry mob happen.

Once we did get out of the bumper to bumper human traffic it was rather pleasant. Due to us having the baby and a pram we were able to access the bottom walk way at the Opera House. This allowed the kids to run around, me to sit down with the baby and to marvel at the lights of the Opera House and the rest of the harbour.

It was a HUGE pity that we did not see and do more. We were expecting so much more.

Did you go to Vivid? Were you at Circular Quay? Or did you go to Taronga Zoo? How about Darling Harbour or The Botanical Gardens?

What were your thoughts? Did you have a great time or were you stuck in human traffic with extremely rude and horrible people like us. Let us know.