Melbourne Cup is tomorrow, and it is the race that stops a nation. So as the term “Stops” indicates nothing much happens on cup day. When I was in the corporate world it was an excuse to go for a long lunch, and that really meant, we had lunch and never made it back to the office. 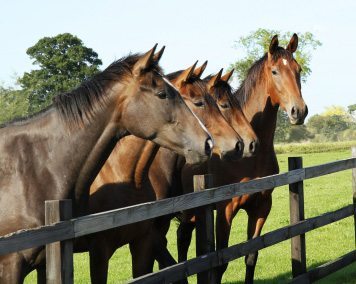 Not the actual horses racing in the cup, but they look like they might. Image courtesy of Tina Phillips at FreeDigitalPhotos.net

Melbourne is the only state in Australia that has a public holiday for tomorrow, the rest of the country has to turn up for work. That said, no work really happens tomorrow as there is a lunch at the office and everyone is busy with the office sweep, catching up on gossip and yelling at the TV.

I for one have never understood why the country does not embrace the holiday that only Melbournians get? Why don’t we just create the holiday and make it official. Most people throw a sickie that day, or don’t really work so why not have the day off for all? It would make it easier all round. I would love to not race to pick kids up from school to then come home in record time to manage to catch the race on TV.

Mothers would love to participate in the race as well and not have to miss out due to the school run! I don’t want to live through the radio and would love to see the colours of the jockey’s silks and see if the horse managed to beat the other by a nose.

I love the lead up to cup day, the fashion, the stakes and the idea that I might win big. It could happen, and maybe 2013 is my year.

Do you think the day should be a national holiday? Why should only people in Melbourne get the luxury of the day off from work to party on for the race. Unfair I say.

According to Wikipedia,”Melbourne Cup day is a public holiday for all working within metropolitan Melbourne and some parts of regional Victoria, but not for some country Victorian cities and towns which hold their own spring carnivals. For Federal Public Servants it is also observed as a holiday in the entire state of Victoria, and from 2007 to 2009 also in the Australian Capital Territory known as Family and Community Day replacing Picnic Day”

Maybe I should start a petition on change.org to make it so? Would you sign it if I did it?  I have created one to see what would happen. Do you think nothing much happens on the day other than the race! It does stop the nation and why not have a holiday for all, not just in Melbourne.

The Bet is On

Q & A with Alex And Chris from One Born Every Minute