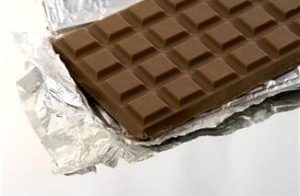 Chocolate for an improved you!

If you looked at the heading of this post, you would say “really does chocolate make you smarter?” Well according to “The New England Journal of Medicine in the October issue contains a paper written by Franz H. Messerli M.D. on the relationship between the per capita number of Nobel Laureates that a country has produced and its level of chocolate consumption.” Yes there is a relation to how much chocolate a nation eats and its cognitive performance as a population. Interesting right!

I know it is hard to believe but it all comes down to flavanols. “Flavanols have been shown to slow or reverse the drop in cognitive performance that often accompanies aging. It so happens that cocoa is a rich source of flavanols.” (Kasey Edwards, How chocolate makes you smarter)

Don’t think that Australia is up there as a huge chocolate consumer or even having the highest number of Nobel Laureates, we have 13  and as you can imagine Switzerland has the highest chocolate consumption and of course nobel laureates. Maybe eating more chocolate high in flavanols is a good idea.

In Kasey Edwards article, “How chocolate makes you smarter” she asks how much more chocolate do we need to eat to make us smarter? Well…

‘The minimally effective chocolate dose seems to hover around 2 kg per year, and the dose–response curve reveals no apparent ceiling on the number of Nobel laureates at the highest chocolate-dose level of 11 kg per year.’ “In short, the good doctor is telling us that the more we eat, the cleverer we get.”

So when you are eating chocolate this holiday season or at any time during the year, you are improving yourself by eating the chocolate and each bite will hopefully make you smarter and maybe younger.  So don’t panic when offered another choccy.

Not well and Hectic