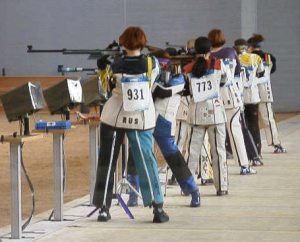 Shooting air rifles is not harmful, it just puffs a bit of air, and there is no recoil for air rifles compared to the standard rifles. As there is no major or immediate danger, the unborn child is in no harm, so what is the fuss about. One person I spoke to says of people who shoot air rifles, “Are they really doing anything?” , this is due to the quietness of the rifle – so not only is there no injury after using this type of rifle, it is also much easier on the ears.

To participate in this sport, you need to be calm, have low blood pressure and focused. These behaviours are of great benefit to the unborn child, and yet another thing that will not harm him/her. I hope that she does win now to quiet those that criticisd her.  I am cheering for you! Go for gold! (I know you are not in the Australian team, but I think what you have done is great)

Why can’t we give this athlete a break and just let her enjoy her time at the Olympics and focus on her sport, not focus on the criticism of her being pregnant.  Send in your comments.

Keep up with Mummy to Twins, Our social sites: