Our little boy has been doing things early. Yes he is keen to stand, walk, sit up and do everything. He has not got the memo that he cannot stand, walk or sit up yet, but it does not stop him from trying.

Alexander is talking and telling us very important things. Some things he gets very worked up about and his chats go on for ages. Some chats are short and they consist of umming, blowing raspberries and trying out new sounds. Some chats end with him in a fit of giggles, maybe he has just told me the best joke in the world and he cannot control himself. Pity I don’t know the language to know if it was a fabulous joke or the winning lotto numbers.

He has laughed, and smiled before experts say he should have (Smiles and big laughs have been had since he was about a month old). He has big chuckles with things…. I think he has a great sense of humor already. He is a very happy baby (Obviously if he is in pain or annoyed he is not happy)

He has rolled over well before he was three months, at nine weeks he was trying and partially sit up.  At about two and half months I noticed he was drooling, putting his fists in his mouth and just wanting to chew everything. He loves chewing the sleeves and the front of his outfits, of course this makes everything wet due to the baby drool (Many outfit changes later to ensure warm and dry clothes – I think he is giving the twins a run for how many outfits he can wear in one day)

Of course I thought he was teething and then dismissed it. He is too young. It cannot be happening now.

Drool and fists in mouth persisted and of course then upset baby that needed mummy cuddles. 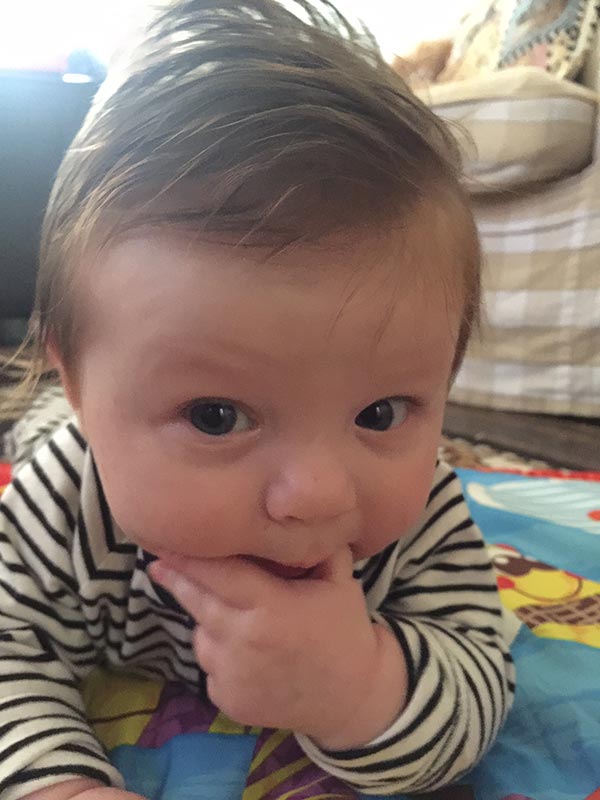 Alexander having tummy time and also to putting his hands in his mouth to soothe his gums. I just love his fab hair, it looks so stylish and funky.

I checked gums and did not see anything until he forced my fingers into his mouth and then I felt the teeth working their way through the gums. My little boy is indeed teething and has been for a while now.

This was really silly of me to not see the signs. I just thought he was too young. I should have known better after having two kids that have gone through the same thing, although years ago now.

I must say that the twins from memory were good regarding teething. I just took the edge off with some painkillers and some bonjella and they were good. Although out of sorts but not screaming the place down like our little man is. He has some medicine when he needs it and then cries and needs mummy cuddles and attention until he falls asleep. We all know mummies cuddles fix everything don’t they.

The baby does see the twins race around the house and I can see that he is wanting to join them. I do understand that children learn by seeing others, and therefore thought that my third child might be quick with some things. However I did not think he would be teething so early. I mentioned this to nurse at the local medical centre and she told me that it could still take a while to see a tooth. We have not had a tooth erupt from the gums yet and not sure when it will happen, I’m just amazed that the process has started so early.

This milestone chart from BabyCentre UK lists some of the things that our new baby has done… so that is not too far off when it happened for us. According to this table we are on track. However other sites say that it all should happen later. I know that every baby is different and this kid is unique and an individual. He will do things when he is ready, it does not matter if it is early or later, just as long as they happen is all I am concerned with.

One person I know who also has three kids told me that his third child did everything much earlier than the first two. He believes it was the fact that he saw his siblings do everything and wanted to be like them. Did this happen to you? Did the first kid/s help the other children do things earlier?