Yesterday our new TV arrived. We were all very excited. It arrived in a very very BIG box. I am sure it was not that big? Did I just forget what the size actually was? I’m sure it is just the box and it has padding. The HUGE box worried me. I was not sure we could fit it in the room.

Our old TV died a long time ago and before it finally gave up its last show it was flickering and just not looking well.

When it finally went to black we had to have a replacement. We used one of my computer monitors. Yes we went from a HUGE screen to a tiny one. Hubby and I took it carefully out of the box and thank goodness, it is smaller than the box! 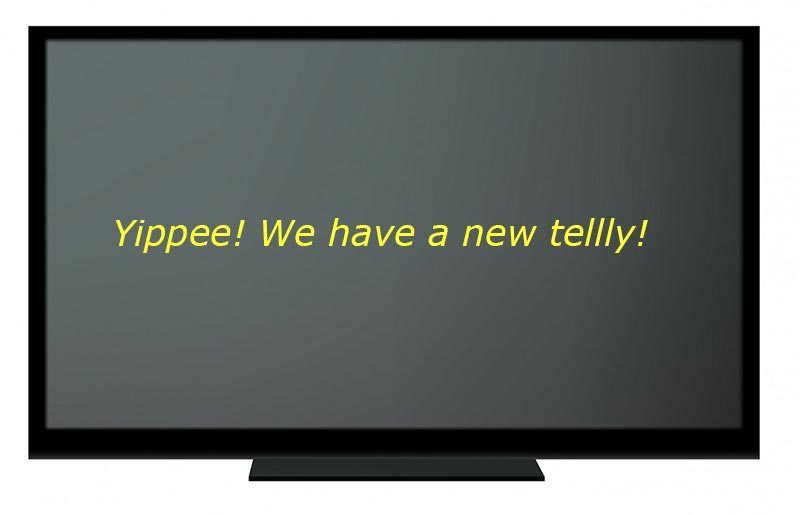 We finally have a new television. Now we need to figure out how to work it.

Well it would not have been tiny when I was a kid, it would have been huge, however since we were all used to something enormous it was weird to suddenly have a smaller screen. The kids were shocked when we produced the monitor for a stand in until we replaced the television. I could not understand why they were so upset, but then I figured it out. They had never known a smaller screen.

Now we have the reverse happening. The new telly is 3 inches bigger than the old one. We have decided to rearrange the living room a bit for a change and to create more space. Now every time I walk past and see the TV it is MASSIVE! JUST HUGE! It will take me some time to get used to it.

Has this happened to you?

When we purchased the TV we went to look at all different makes and models. There was one that was GIGANTIC! It would have taken an entire wall to put it on. To have this telly you would have to have a very big house as well. We got one that was still big but not something we cannot fit in our house.

Plus the GIGANTIC telly cost nearly $12,000 so that is not the price we wanted to spend on a television.

I am very happy that we finally have a new TV but since it is new we have not figured out all whiz bang things that it comes with.  It will take us some time to learn what buttons to press, and what to do with it. I managed to watch Clarke and Dawe and Portlandia on ABC’s iView today so that is something.

Before I pick kids up from school I need to get some cables that will hopefully allow me to watch free to air television again. I have not been able to watch regular telly for a long while now. It stopped working and we think it might have had something to so with the old telly not working and communicating with the aerial. I hope this is the case. If not it is an aerial issue. Hubby did look on the roof and thinks all looks good.

Fingers crossed that the magic cables I buy make the television all work.