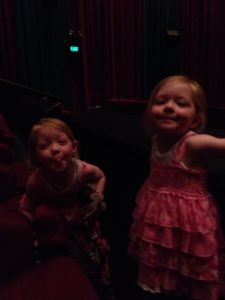 Waiting to see Tinker Bell – The Secret of the Wings

This is the first week of school holidays and you guessed it a great kids film is on at the movies, it is the latest Tinker Bell film; The Secret of the Wings.  I thought why not take the twins to the movies and have a day out. As you would have thought, this news was met with cheers and giggles. The girls love Tinker Bell and of course fairies, so seeing the latest installment of the Tinker Bell films was very exciting for them.

I managed to get to the centre early and thought it was wise to purchase tickets first, as said it is school holidays. I did not want to leave the ticket purchase to find out the session was sold out. As happened, there was a few people but not as many as I was expecting. Maybe it was due to seeing the early session? Probably the afternoon time might have been busier? Not sure but thought it was a good idea to get in early and then we can have lunch there, and go home. It is a 40 minute drive to the movies at this centre so thought I did not want to come back too late, as then I will have very hungry and tired kids.

The film was a hit and as it turns out Tinker Bell has a sister. Tinker Bell and Periwinkle were born from the same laugh of a baby, so they are twins! Although they never said they were twins, both Tinker Bell and Periwinkle’s wings are identical. So I would conclude they are twins. The only problem is that Periwinkle lives in the winter woods and Tinker Bell lives in the warmer climate so cannot live in the cold and vice versa for Periwinkle.  It was an enjoyable film, Lillian was a bit worried and scared at parts and ended up sitting on my lap for cuddles. It really wasn’t scary, but it was a bit worrying at times for the characters so I think she was upset that it might be getting scary.

According to the Hoyts website the Tinker Bell film is about: “Tinker Bell meets Periwinkle and ventures into the winter woods with her and Tinker Bell’s other friends to find the secret of fairy wings. If you are interested Wikipedia has a great history and breakdown of Tinker Bell. Worth a look.

Both girls were very well behaved and also held on and did not need to go to the toilet until after the film. No nappies so that is such a big deal. I have big girls now. We drove down to the movies and they held on, we go the tickets and then went to the toilet. So I am a very proud mummy that they are doing so well.

Before the movie I purchased new sandals for the girls as Lillian’s are getting too small, although still fit they soon will not be able to be worn. Julia’s seem to be broken and not sure they can be mended. I ended up getting half price on the second pair and of course both girls wanted the same type. Very lucky they had two of the same in the right size in stock. So good deal on the shoes. Cheap tickets at the movies, then had lunch, kids played at indoor play centre and then we went home singing away to a great music CD.

Kids fell asleep in the car, and no one wants a rest in bed now we are home. The girls are watching Casper the Friendly Ghost cartoons.  Will organise an early dinner for them so they get off to bed at a reasonable time. Tomorrow we are off to a family lunch, then free tumbling classes at the gym, and then playgroup. I should contact some parents of the girls friends to organise some play dates. I also need to focus my time on uni study. My job with the school holidays is find things for kids to do.

What are you doing these school holidays? Have you taken the kids to the movies lately? What have they seen and did they enjoy it? 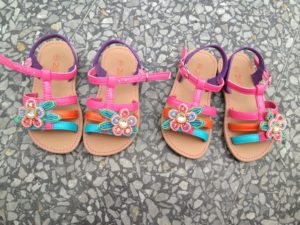 From Kids Spot here are some ideas for school holiday activities:

How did Winnie the Pooh get his name?