Alexander is an adventurous and energetic little boy. He loves to explore new places, play with new toys, climb and just get into mischief. A normal child really.

He is very taken with stairs and any stairs he has to climb. It is a struggle to keep him away and sometimes it is just easier to leave,  it is safer to take him to an area that is safer and I don’t need to be on constant alert.

Last Wednesday I tried to take Alexander to baby time at the local library. It did not go well. I was very early and I tried to play with him and to read books while we waited. This did not work out well. I was going to go somewhere else but baby time was not going to be long so decided to wait.

On one of the trolleys that they have the books on the library had the stereo system for the baby time. Alexander decided to push this like a walker and nearly bumped into people and the wall. Not good. 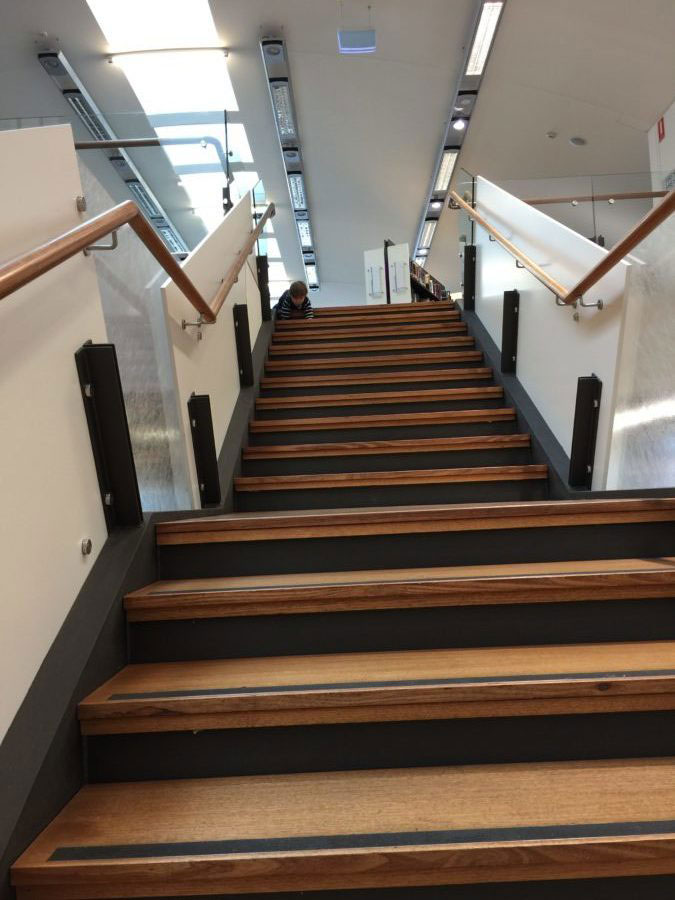 My danger child, the future rock climber and explorer.

I then distracted him and he got busy crawling in and out of the bottom of a book trolley and then sliding on a book. He thought this was a lot of fun. I spoilt the fun and took the book off him. He then decided that he wanted to remove books from the shelves and just put them on the floor. Oh gosh!

Many other mums and dads had arrived now and I got chatting with one other mum. I was one talking to her for a few seconds and Alexander had climbed the stairs all by himself while I chatted with this mum. Geeez!!!!

I saved him from coming down and then baby time started. I thought that the music, songs and other kids would make him stay with the group and not want to explore the stairs again and everything else in the library.

He did not want to stay with the baby time group and this meant I was up and down due to his obsession with the stairs. Alexander even visited the quiet reading area and nearly put his hand on a mans leg while he was engrossed in his book. Oh my gosh!

My baby will not sit still.

He was climbing and doing all sorts of things that were not appropriate in a library. I know they expect babies to be a little noisy when they are there but the library is not an obstacle course or baby gym.

After all this back and forth I left to Alexander’s annoyance. I was exhausted racing after him every two seconds.

I did look around and no other baby was exploring or doing what Alexander was doing. The other babies were in the group, sitting nicely or staying with their parents. Not my little boy, he was off and interested in everything but the baby time we came to see and experience.

Today Alexander is fourteen months old. Yes only two months after turning one and he now seems so much more grown up. He has been doing the following things:

Does your little person love to explore? I found it interesting that my little boy was not interested in baby time at all!

What about your baby/child?

Did you find that other kids just sat and listened to the show or event that you went to? Aside from your child that likes to roam and explore! Mine could not sit still.

Maybe it is the age? He could just not be that focused or ready for baby time yet.