Last week I was lucky to attend an event by the Disney Junior Channel. Yes, how exciting going somewhere fun with the kids. I took them out of pre-school and raced off to the city for a fun day. (We went to Hoyts at Moore Park). It was to showcase some new shows for the kids and to make you aware of other things that the Disney Junior Channel offer. 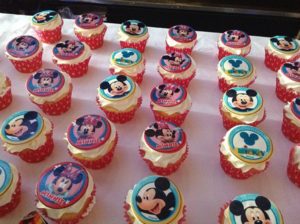 Too many to have. I can only have 1? More Disney cupcakes. YUM!

The shows that we saw were:

Wow look at all those great toys. I want them!

Due to us going to the Disney showcase my girls are now obsessed with Doc McStuffins and Sofia the First. We did have a movie of Sofia the First but had no idea there were television shows of the same character.

Wow they have all these shows? Cool!

I wanted to say thanks to Disney for giving my girls a show bag each, they were very spoilt and got such great gifts. Toys, dvd’s, books and a colourng in book. Seeing Doc McStuffins has made them rather fanatical about the show. They now check up all their toys, have even given plants and trees in the backyard a check up and want to be just like Doc.

Since they have a new passoin I have used it for a suprise for Christmas. Each child is getting a Doc McStuffins Doctors bag for Christmas. We already have a doctor dress up for each of them and the doctors kit they were sharing has finallly broke. The delivery should turn up soon and I’m so excited I cannot wait to see their faces when they open it. “It’s time for your check up! Time for your check up!” Gosh now I’m singing just like the show!

So happy with our new puppies. One is called Violet and the other Pluto. Yes I know they are both Pluto.

The girls love Doc and Sofia due to the great stories about girl power and doing things regardless of being a girl. I also loved the fact that they never give up. It is great to see a great cartoon that shows girls that they can achieve and be or do anything they want. Well done Disney and thanks for empowering girls.

Another plus is that Disney Junior have Family Film night. Every Saturday at 6pm there is a family friendly film to watch and starting at 6pm it is good time so little ones can go to bed straight after the film. Ideal if you ask me. I remember when this used to happen on television all the time. It is good to see that Disney has brought it back.