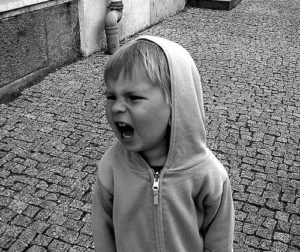 I am having issues with one of my girls, everything is anger, frustration and screaming as she tries to explain herself or get anything done. I have tried and tried to get to the bottom of it and I just get told that other kids don’t share. The child who is having hissy fits at light speed, explains that when she is playing with a toy she tells the other child that she is busy with it, but these other kids take it away from her. I was also too told that this happens with her sister. I addressed it with the sister and told her that she needs to let her have more time with the toy and then maybe later she will share.

As you might have guessed this talk did not go well. The sister of the offending child just denied all and made the poor angry child even more angry. Oh my! What to do. I do believe that something like what has been told to me is happening and having watched them at home I have seen this happen, each child is not innocent and are to blame at some point. However how do I stop the angry, frustrated behaviour.

Today the girls were singing with their microphones and the child who gets angry at everything did not want her sister to start singing without her. I told her to go off and get her microphone but she just stood and screamed and cried at her sister for her to stop making music. At first I told her to just hurry up and get it so that she could join in. I did not want to stop the other child having fun but thought if it was causing so much distress, why not ask the other child to stop and wait for her sister. She did wait a bit but the anger banshee toddler did not race off as promised and just stood there getting more upset. This made the other child resume her singing and you can guess what happened next, yes, utter chaos.

Finally she got her microphone and it was like she was another person, smiles and singing and happiness consumed her! Now I believe she is angry and frustrated that she is not getting her message across, people are not doing what she wants or expects, and it is an age related issue and she is pushing the boundaries. Is this a glimpse of teenage years? I really hope not! Has this anger and frustration come into your house? How are you coping with it or coped with it?

Some sites that might help if you are in the same situation:

Send in your tips and tricks so that I can test it out and we can all learn.  Why not continue the discussion on our Twitter or Facebook pages.