When I meet some mums or people out and about they ask about my little boy. I tell them what he has been up to and give them a quick update on things.

Our little boy who is six months old tomorrow seems to be hitting most milestones early.

When I mention this to others I get one thing said back to me….

“He is going to be intelligent”

Geez I hope so but I’m not sure if laughing before the doctors tell me the baby should be or trying to stand when you cannot crawl or doing things before the allotted time-frame means you are going to be genius or at the very least a smart bunny or smarter than the average bear.

Since he was born he has wanted to stand up. I picked him up and he put his legs down on me to stand up. He was just born…. why is he wanting to stand? I had no concept of this due to having preemie twins for my first children. Having a baby born exactly on his due date changes things.

It has not just been one person who has told me that due to Alexander hitting his milestones early he is going to be super smart, there have been many, actually too many to remember. 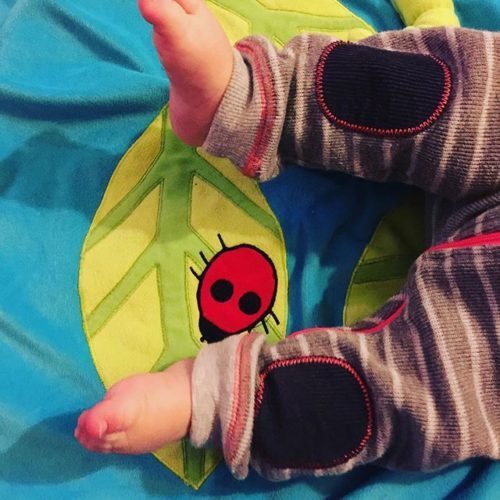 Resting after having some floor time

I do think that he is in a hurry to do things. Maybe he has places to be, worlds to conquer or a business meeting to attend? I don’t know but he is keen to be racing around like the other kids.

Is it due to him being the youngest child? He sees the older kids do everything? The twins did not have this, although they had the constant company and help of having someone with them at all times.

What can my little boy do now?

I personally think that it does not matter when your child does anything. As long as all is well with development and they are happy, healthy and loved it will all work itself out. Of course if you are worried about something it is always best to check. Having checkups and making sure that development is on track, if there are any issues you can hopefully get to see the right people earlier rather than later and things will be resolved or better than they could have been without the help.

I always had the twins checked at certain ages for milestone development when they were babies and I’m doing the same for Alexander. My kids don’t do what others do and vice versa. When things happen is up to the individual and of course if it is like when the twins lose their baby teeth we are not keeping up with the other kids at all. My girls have only lost 3 teeth in total, mind you I was slow on that front too as a kid, so maybe it genetic.

From my reading online I found that if your child is an early reader, it is likely that they are smarter. Yes you read that right.

“We also know something about early reading. While it’s not necessarily a sign of genius, early readers are usually “smarter than the average bear.” Nancy Ewald Jackson, a developmental psychologist and reading acquisition expert at the University of Iowa, says one review of the literature found the average IQ of early readers was 130. “That’s clearly above average, but half the group would not qualify as gifted in terms of IQ,” she points out. One of her studies showed that precocious kindergarten readers tended still to be reading above grade level by grades five and six. But it isn’t clear whether that’s because they were bright, and therefore read early, as opposed to because they read early, and thereby became smarter.” ( Hoffman, John, Today’s Parent: “Earlier, faster, better: precocious kids”, Oct 4, 2006)

The twins and now our little boy have done things earlier than expected. The girls did things way before it was thought things would happen and maybe that was mainly due to the fact that they were six weeks early. Well could have been seven weeks early if one twin had her way!  They spoke, sat up, crawled and rolled over way before they were supposed to. Maybe they were in a hurry like our new little boy is as well. Or could it just be genetics again?

I wish I had a crystal ball to tell me if these comments are right about intelligence and smarts.  I am just pleased that he is a happy, healthy, we think he is smart, and active little person.

Did your baby hit milestones early? Were you told that your little boy/girl was going to be intelligent due to reaching these development milestones before they are supposed to?

If you are a parent to older children has this idea panned out? Have they blitzed their grade? Or the top of the year at uni? Or how about launch a million/billion dollar idea as a startup company? Let us know.