I have had two days of angst! Yes I have had some stressful moments. Why do you ask?

Well, the poor little baby has had his first injuries and falls. Insert unhappy face here. Or maybe have a HUGE lie down. After Wednesday’s incident I was so drained and exhausted.

Firstly on Tuesday I was looking after the baby. I carried him in the rocker to the living room. All was good until…. He rolled out and fell head first on the ground. Thank goodness we have a nice rug that covers the wood floor. It did still make a noise when his head collected the floor and oh did he scream. I felt horrible. The only saviour was the fact that he was so close to the ground when this rolling out of the rocker occurred and it was more of a scare than a full blown injury….You can bet I was breathing a BIG sigh of relief about this.

Now to tell about his second incident.

It happened yesterday (Wednesday). I was busy getting all the rubbish out of the house for bin night and the baby was screaming the house down. The twins were in the backyard playing. I thought if the baby can see the kids and be with them he might calm down. I took the baby and the rocker out so that he could sit with his big sisters. I told the kids to leave him in the rocker and to ask if they needed any help. I was not going to be long and was soon to join all the kids so that I can do the twins reading for school in the garden. It was still nice weather and I thought it was a lovely idea. The girls had their readers ready and were just waiting till I was ready.

I was finished and had come in and was just tidying up to come out to be with the kids. I then heard a horrible scream and yell from the baby. I raced out to see what the problem was and to make sure all was okay. I see one of the kids putting the baby in the rocker and he is covered in sand. I ask the child why her brother is covered in sand. She tells me honestly (I was pleased that she told me the truth although she did something bad. She was grown up enough to tell it the way it happened. I told her that I was pleased that she did that and that I am proud of how she dealt with the situation) that she was holding him in the sand pit and he fell and now he has sand all over him. Gosh not good! 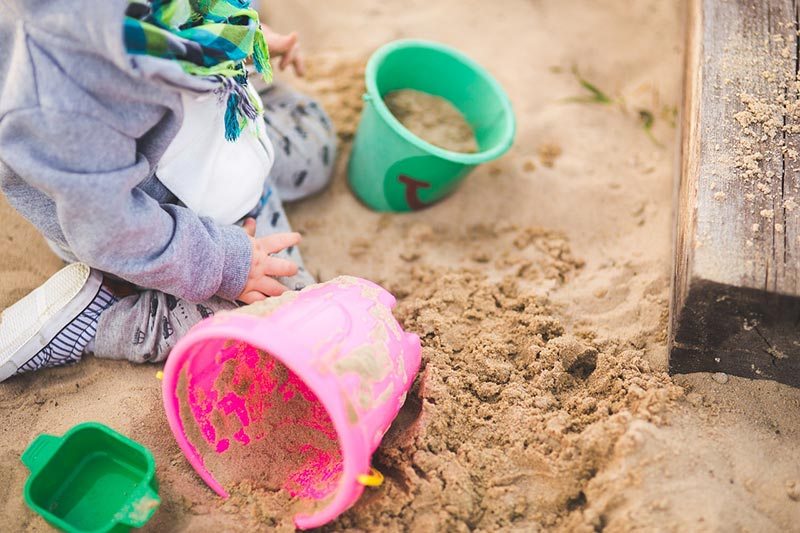 The scene of the crime. At least it was a soft area to be.

I made sure to tell the girls that this was not good. It could have gone so wrong, and we were very lucky that the baby is okay. He did not fall on cement, or on the hard wood borders of the sandpit and other things….. gosh it could have been horrible (This is why I was so drained and fell asleep while watching TV last night). I could have spent last night at the hospital. I am very grateful this did not happen.

I got a bath organised for the baby quick smart to wash away the sand from his whole body but especially his face. My main concern was his eyes. I did not want any stray grains of sand in his eyes. In the bath I had a flannel and soaked it with water to wash the babies eyes, I did not want to wipe so much but put water in his eyes so that it got the sand out. I did my best but due to the baby not understanding he tried to open his mouth and drank some of the water (In hindsight this was rather funny but not at the time). This ended up in him coughing and me changing tactics to get the sand out from around the eyes. Let me know if you have done this also.

As you might imagine, poor Alexander was hard to settle and when he finally did settle he slept a long time. I think he was stressed out about falling into the sandpit. I was so zapped of energy due to the worry and what could have happened.

After this happened it got me thinking. If you have older kids and a new baby, what have the older kids done while they were helping look after their brother/sister? Let us know.

I know the kids were trying to help. I think they now understand how the fall could have hurt their baby brother, and how lucky we are that he is okay and his happy smiley self. Maybe this is a good lesson for the kids to learn. They need to be more careful when they are with the baby.

I will too make sure that I am more careful as no one wants to have a fall out of the rocker or the first experience with the sandpit to be such a drama.

I hope that the baby is not going to be permanently scared about sandpits and that he will like them when he is older. If he has a fear of sand this will be the reason for it.

What did we think About HelloFresh?

Make Sure to Get Vaccinated