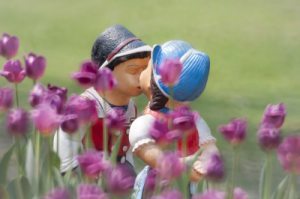 Dolls kissing, not the twins but nice pic. Image courtesy of Toa55 at FreeDigitalPhotos.net

The other day after picking up the twins from pre-school I was told that one will marry one of the boys at school. I asked why this was so, and she said that they like each other and they both have decided to get married. I was rather taken back to say the least. I know this is just play, they are four years old and soon to be five so not like they are running away to get married just yet. Well I hope not!

I asked the other child if they are marrying anyone and she mentioned the same boy. I told them that two people cannot marry the same person. They got angry at me and told me that I did not get it, and they were marrying the same boy.  Not sure if the girls are taken with them or if the boy has used his magic and the girls are under a spell. This boy is very nice, kind and gentle and the girls are good mates with him and have a great time. It is a nice friendship.

Yesterday I arrived to pick the kids up and while putting them in the car they told me that they kissed this boy and he kissed them, as they were going to be married they said married people kiss each other. I explained that just because you kiss someone hello or bye does not mean that you are marrying them. Not sure if they are thinking that all people who kiss need to be married. If this is the case all of you that are not getting married are in trouble! You should put it right and go and get married NOW! Well according to the girls that is.

Maybe it is a school crush? However the girls still don’t like boys on the whole. Only some boys are oaky, and this one must be super special to get a kiss and for him to kiss the girls.

Have your kids done the same? If this is pre-school I shudder to think what kindy and the rest of primary school will be like. Send in your comments.

No Jab = No School