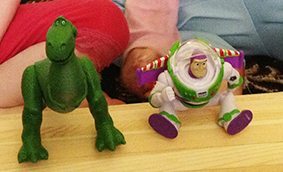 Rex and Buzz, gifts from Havaianas

I have sorted the twins birthday presents and have been quite happy about the purchases. The girls have randomly demanded to get the same toys that I have organised for their birthdays and both have no idea. I keep on telling them,”We cannot afford it”, “Maybe for Christmas” and “I have already organised your presents and those are not it” Little do they know that they are getting some of the things they want and are asking for.

A while ago, one of the girls after watching a film, took me and shook me and said, “Mummy, I gotta have the doll, You gotta get me the doll, the doll in the shop!” I was not understanding what doll. She then yelled at me, “The doll with the pretty dress, you know in the SHOP!” I explained that this is not the way to ask for something and again repeated that she is not getting it as her presents are already organised. (We have got the doll but she does not know this)

Today, after watching Toy Story 3 both girls demanded to be taken to Kmart to purchase Toy Story dolls and toys so they can play like the kid in the film. Both children told me that they did not want or need anything else and will not ask for other toys, and just wanted Toy Story characters. Again, little do they know that mummy has already organised plush dolls that are all the characters for the film.

I must say it is hard to keep a straight face knowing that I have the toys they want and how desperate they are to get them. I am inventing all stories under the sun why we cannot get them for the girls. The delightful thing that is making me happy is knowing how excited and happy they will be once they unwrap the presents that they don’t think they are getting. I’m getting excited.

Have you found it hard to not spill the beans? Have you managed to keep your kids in the dark about presents that they have been dying to get? What things have been told to keep the secret or make it believable that the toys cannot be purchased. After I had organised the Toy Story dolls the kids would not stop hugging and carrying around the Toy Story characters in Target. I had to physically remove them from the box and make them put it back. It was so hard to not say, don’t worry you will get it for your birthday. I kept my cover and was a bad mummy, saying that we could not buy them as they were too expensive.

Has your child been excited when they open their presents? Were you more excited to see their faces? I know I cannot wait. Send in your comments.