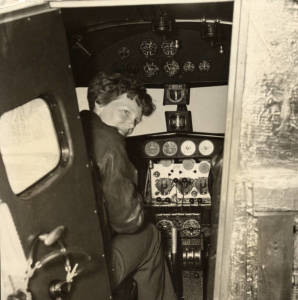 I was always fascinated with Amelia Earhart and her attempt to fly around the world. I think she was a great woman of her time and history. Women normally in the 1930’s and earlier did not fly planes, some did but it was very few. According to Wikipedia: “On May 15, 1923, Earhart became the 16th woman to be issued a pilot’s license (#6017)[42] by the Fédération Aéronautique Internationale (FAI)”

So 16 women who can fly is not a great number at all, and achieving it at this time in history was a great accomplishment.

Lately there has been talk that they have found Earhart’s plane and possibly the camp where she and Noonan (her navigator) survived for a time. A sonar image off the island of Kiribati might show where the Electra (Earhart’s plane) ended up. This article also reveals bottles and items that were found at a camp that is now believed to belong to Amelia Earhart.

I am not an expert but cannot see what everyone has seen in this sonar image, I just see a line but as said, Not an expert so I might have missed the detail that I should be looking at.

While at school I did a talk about Earhart and her great career. I thought she would have lived if she was able to land on an island and it looks like this did happen. She survived for a time but since no one knew where she was and she could not contact anyone she died on this island or one similar.

I am inspired by Earhart’s strong will and her achievements. It shows me that no matter what women/girls set their minds to, they can  do. I do find it sad that she was never found and a part of me wishes the story was very different. It would have been marvelous to have found her and Noonan in time, so they could fly another day.

On the official Amelia Earhart website there is the below quote from the letter she wrote her husband in-case she did not return:

“In a letter to her husband, written in case a dangerous flight proved to be her last, this brave spirit was evident. “Please know I am quite aware of the hazards,” she said. “I want to do it because I want to do it. Women must try to do things as men have tried. When they fail, their failure must be but a challenge to others.”

Were you inspired by Amelia Earhart as a child or even now as an adult? Did her achievements inspire you to fly planes as well or achieve in your chosen field?  I admired her single mindedness and strength of character that allowed her to follow her dreams.

Winter is coming...Wait it's Here!

Is it Earhart's Electra?