Happy Halloween! I hope you have a fun and spooky time.

Have you created your Ghost Pumpkin or otherwise known as a Ghost jack-o’-lantern yet? 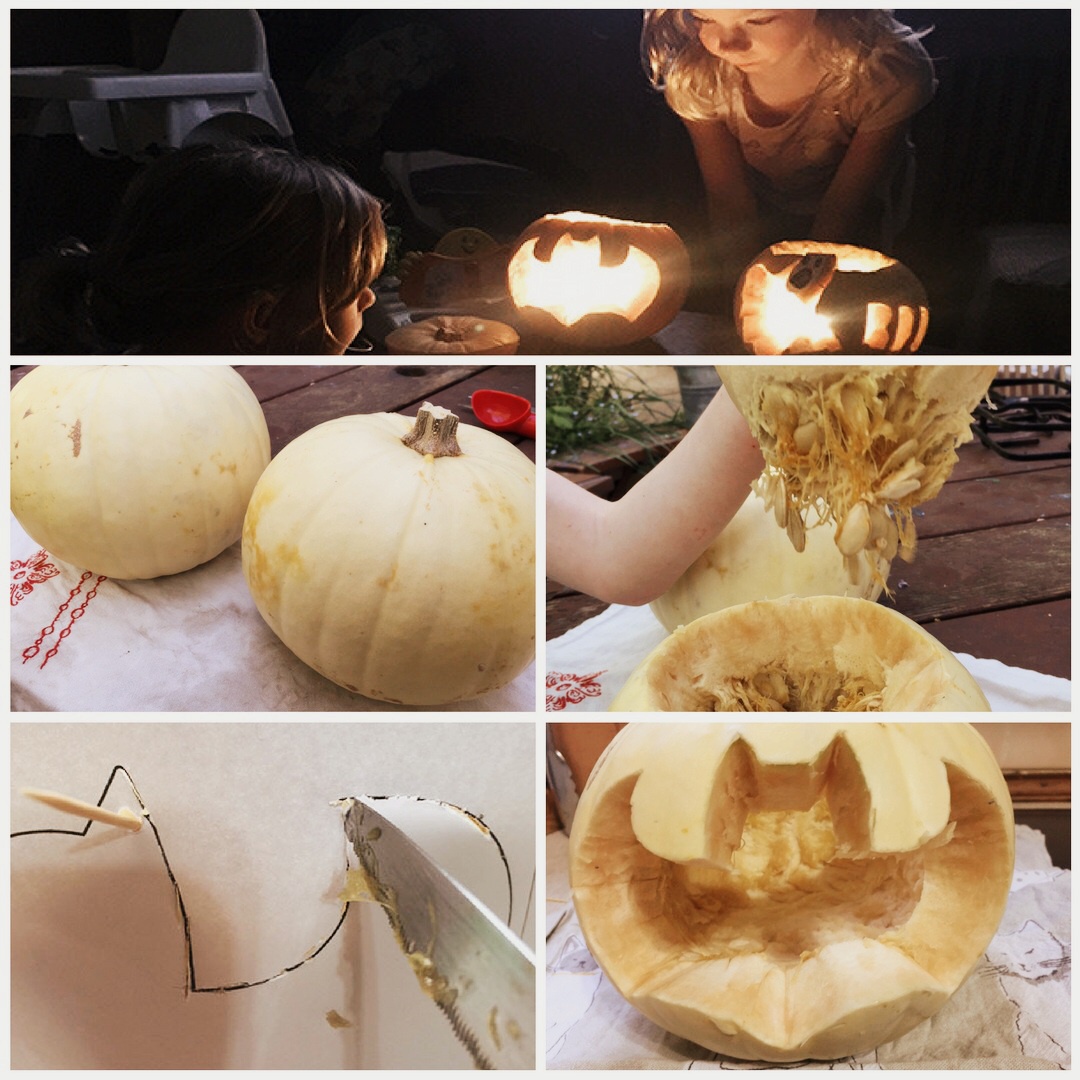 We were carving our Ghost Pumpkins for Halloween. We did one bat and one ghost.

You can just picture the conversation around the board room…. it might have gone something like this.

“We have a whole batch of pale coloured pumpkins”

“Geez, how are we going to sell them?”

“Halloween is coming up, if we call them ‘Ghost Pumpkins’ they will fly off the shelves!”

I really don’t know what was said behind the closed doors of Coles and especially from the marketing team but maybe it did go down as I suggested. I went back the other day and they seemed to have sold out of these Ghost Pumpkins so calling them ghost pumpkins was a brilliant idea.

Since I purchased the pumpkins at Coles they also said that they had more info on how to decorate them on their website. I downloaded the Halloween Stencils to allow me to create the correct shapes and pictures. Do you use stencils or do you just create something on the fly? We have done a bit of both over the last few years so thought I would give the more complicated pictures on pumpkins a go.

What do you need to carve a pumpkin

How do you carve a pumpkin?

Step 1: You need to get the top off the pumpkin first. It is best to create an outline with your knife and go over it, again and again, to work it loose. 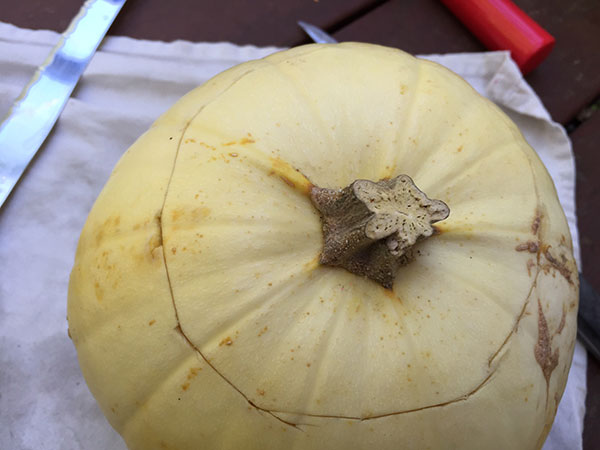 The top with the cuts around it to help get the top off. 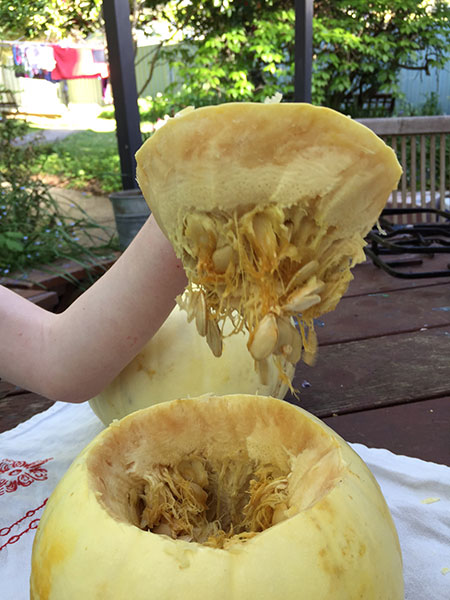 Now the top is off, the inside of the pumpkin needs cleaning out. You can also keep the pumpkin seeds and roast them to add to meals or snacks.

Step 2: Clean out the inside of the pumpkin. This might take a while and it is recommended to dry it out. If you are in a rush and would like to use the pumpkin that day and not wait too long to dry you can put it on the trays in front of the oven to get the heat but not cook it. 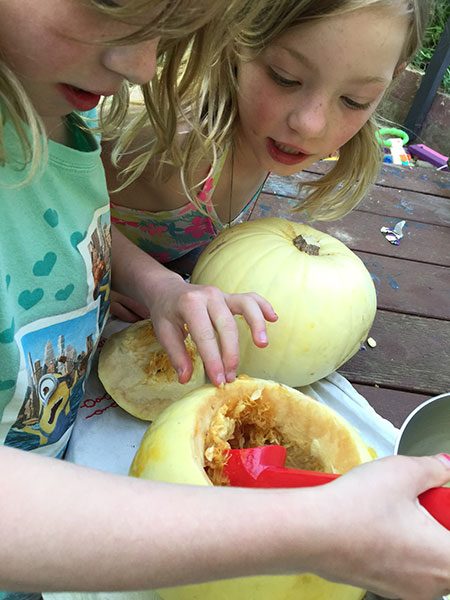 Cleaning out the inside of our Ghost Pumpkins. 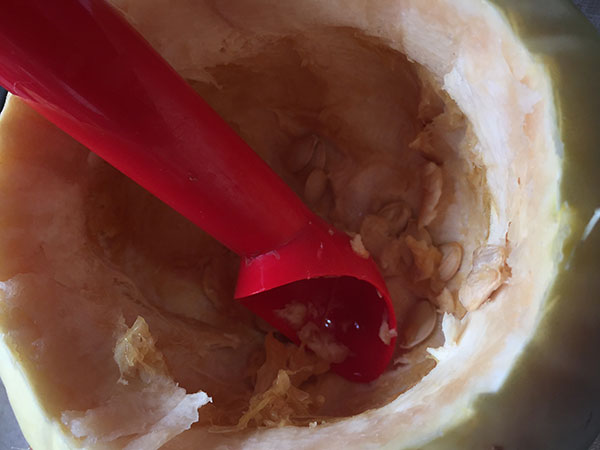 Using an ice cream scoop was a great idea as it made the job so much easier.

Step 3: Once you have cleaned and dried out the pumpkin it is now ready to carve. Remember it is best to have a good idea of what you are going to do. If you make a mistake you will have to start all over again with a new pumpkin.

I used stencils from Coles this time and they helped me get the right shapes for the characters. However, with the ghost, I should have made it smaller or put it on the bigger pumpkin (this was not possible due to one child claiming the bigger pumpkin and wanting the bat on it, I could not tell her otherwise) due to the fact that the head was missing and I thought it would not be an issue. I did think that a headless ghost would be great but it did not give you an idea of the character. I ended up adding a new head with the cut out from the stencil for the eyes and mouth. 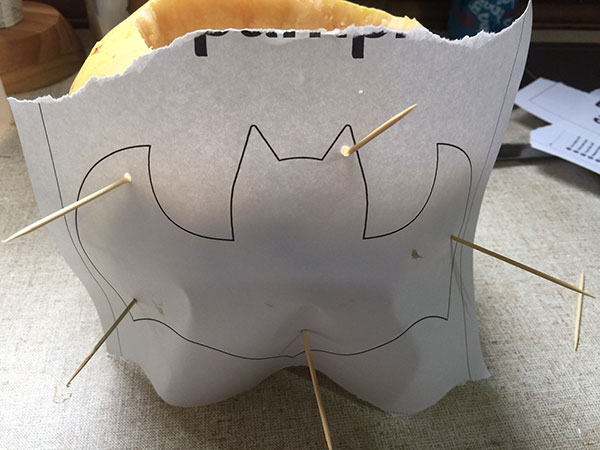 Now the stencil is attached to the pumpkin you can use the knife to mark the lines of the bat. Once you have all the lines there you can remove the stencil and start to create the bat. 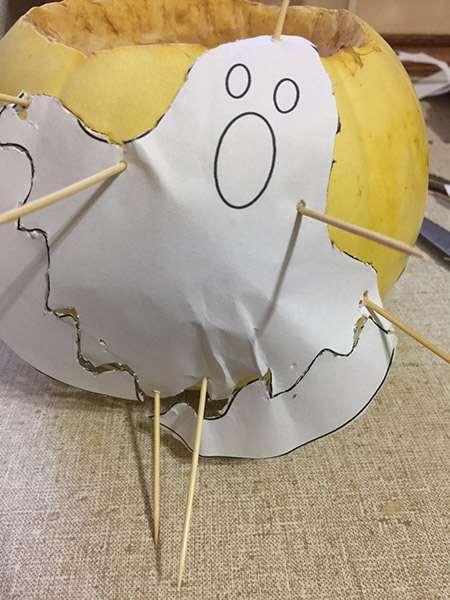 I did the same for the ghost, although I needed to make the image smaller or find a bigger pumpkin. Make sure your design fits perfectly on the pumpkin. 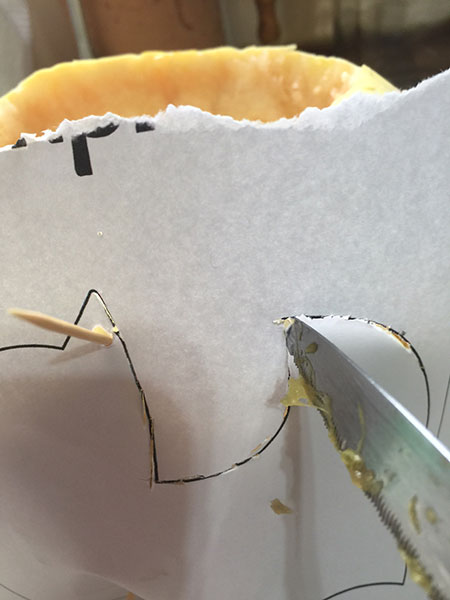 See here I’m tracing the lines with the knife. This is not to difficult but it does take some time. Don’t worry if you cut through the paper as this will just end up in the recycling anyway. 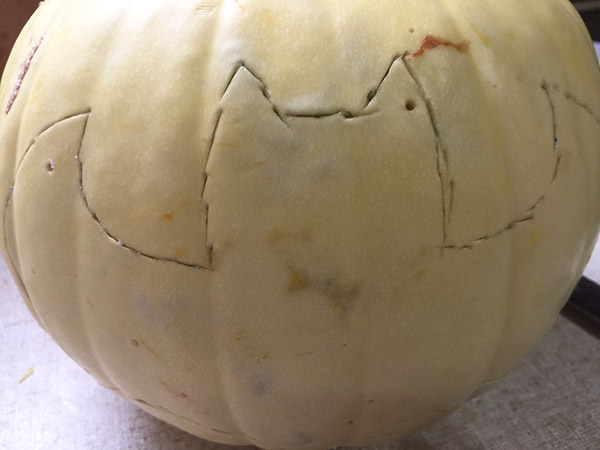 See the lines on the pumpkin is now in the shape of the bat that was on the stencil. The next step is to cut out the bat shape and reveal the bat so you can light it up for Halloween.

Step 4: Now you have the outline the work begins to cut out the bat image from the pumpkin 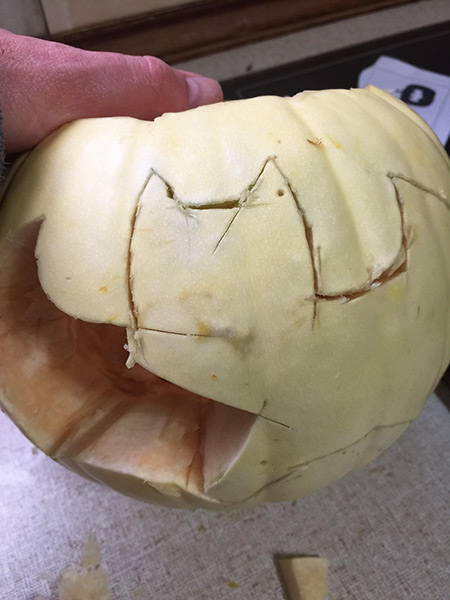 Getting there. It is partially cut out and on its way to being a nice-looking bat. Just take care of the knives and don’t hurt yourself. Remember it is for an adult to do this so that little fingers don’t get hurt.

Step 5: After cutting out for a bit and removing the excess pumpkin a bat is born! 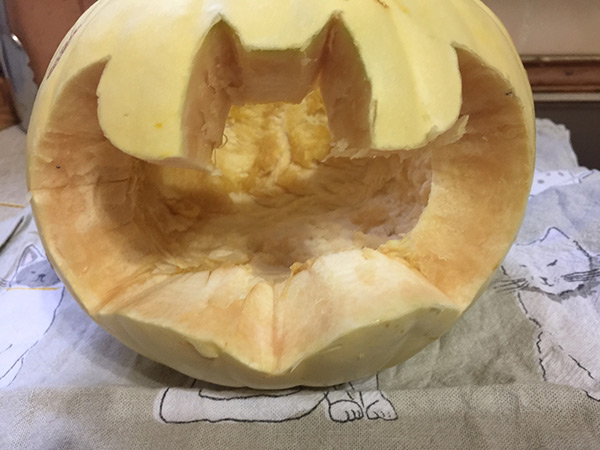 Our ghost pumpkin bat. I think it looks amazing. Using the stencils really helped get the right shapes for the bat’s wings and ears. What do you think?

So now both the pumpkins are complete and the girls were keen to see them with candles in. 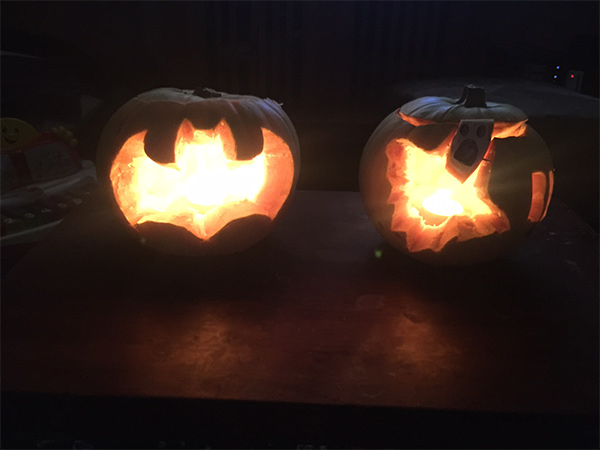 Our wonderful bat and ghost pumpkins are now all complete and lit up with a candle each.

I even added a little bit extra to the ghost one. I put the word BOO! Not my best work but it was done freehand and I thought it might turn out better than it did. Still does a good job and gives a nice spooky impression. 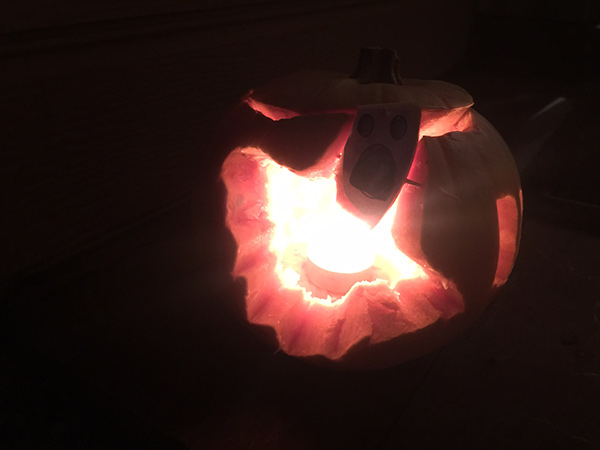 The ghost pumpkin with added head due to smaller pumpkin. 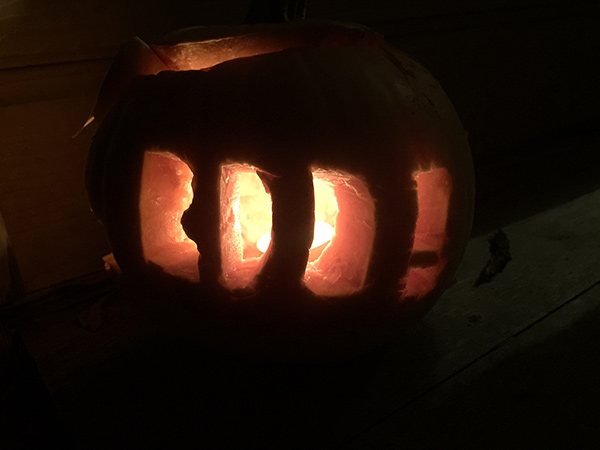 The word “BOO!” on the side of the ghost.

If you don’t have a ghost pumpkin just use a regular orange one.

If you are in a partying mood and wish to have some spooky monsters on the top of your cupcakes, I have the perfect download for you. 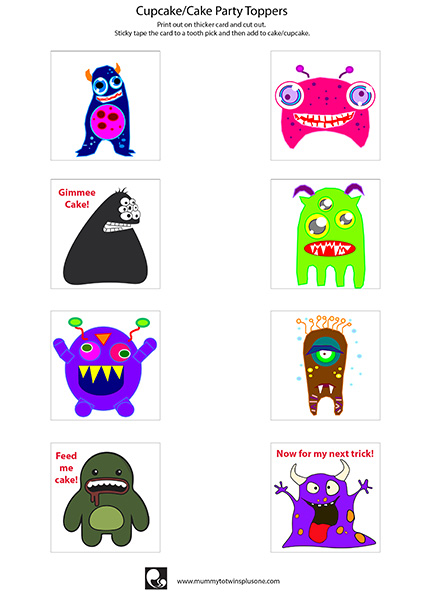 Download this amazing printable to decorate your cupcakes. Perfect for Halloween or birthday parties. Spooky monsters will make you giggle while you eat your sweets.

You get 2 pages of cupcake toppers with fun and scary monsters. Just right for a spooky celebration. 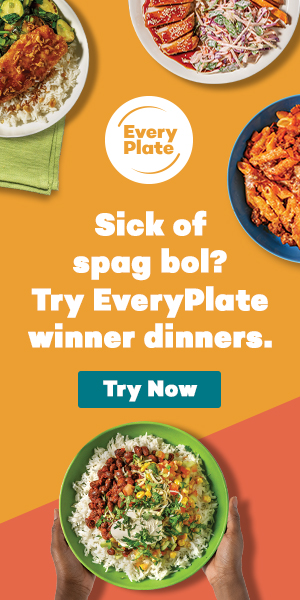