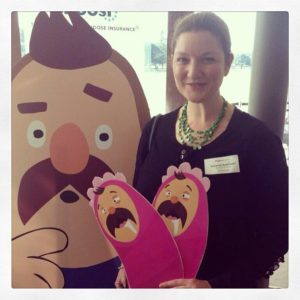 Me with Norm and his twins – Choosi

I planned to write this post on Friday night and then I was too tired and not being able to keep my eyes open was a sign that sleep was needed. I was then going to have it all organised for Saturday, however one of my girls picked up a bug and was unwell and had a temperature. Due to this child being unwell it resulted with mummy having to have constant cuddles with her all day. This unforeseen event meant that the post was not online. So here it is the update from the bloggers brunch that has been promised.

As you all know last Friday I attended the bloggers brunch, I took the kids with me as they had babysitting which was a great idea. It was an early start to the day and I was up at 5.30am to get ready and got the kids up at 6am. I figured out that we needed to leave at roughly 8am or earlier as I wanted to get the car washed.

The twins were good sports and got up without a fuss when I woke them. I hate waking up kids to go somewhere. It is always the way, you want to sleep in and they get up early. When you need to go somewhere you have to wake them up. I am sure this does not just happen to me.

We all had our breakfast and I was organised the night before and had all our clothes laid out so that we could just shower and get dressed. We managed to get ready and the twins were even on time to have a television show before we left the house.

All bags were packed, kids were in the car and we were off. I must say that I made both kids go to the toilet before we left and I did also. We had a long drive to the city. Although it was long, I love the trip and the adventure of going somewhere for the day.

As we were making good time, I stopped to get the car washed to make it look a bit nicer than it was. I fueled up as well and while inside paying I thought I should go to the toilet again as I felt that I needed to go, I brushed it off and thought, NO I can wait until I get there. Now readers, remember this.

Car cleaned and now we are all off to the city. As I approached the city, I was wanting to find a bathroom more and more. I know I should have gone before at the petrol station but as I was on the highway I could not just turn off the road. I had nowhere to go! I just powered on and held on. We got closer and closer to the venue and were nearly there.

During one stage I was taking deep breaths and trying not to think on what I really wanted to do, find a bathroom! I was bracing myself for the girls to then tell me that they needed to go to the toilet, but that was not to happen. Thank god for that.

During this whole episode my GPS that is run on my iPhone was draining my battery and I had very little power left. Do I hang on or risk it to get to the function or do I turn off to then find a bathroom and then get lost.  This was the dilemma.

I did know where the venue was, however I had never driven there myself and knew that there were some roads that were turn left only or maybe turn right only, and did not want to get stuck in a constant problem of being on the wrong street and just around the corner. This has happened before.

To make a long story short, I could not take it anymore. I turned off the road and then turned left, left and left again. I parked in a no parking place. Told the kids to get out of the car, and found a church that had toilets. To my great relief they were open and all of us managed to use their facilities. However during this my phone battery was on its last legs and when we managed to get back to the car, it had 1% battery power left. When I started to resume the map on the GPS it was starting to shut down. Typical and other words that are not fit to print were uttered!

Great, this is just what I needed! Oh well, I knew we were around the corner just a matter of getting on the right road and lane. I saw two ladies talking and said where we were off to and that my phone GPS had died. They told me to turn left, then right and then left and we would be there. They were right and we got there with 30 mins to spare. Thank you ladies, whoever you are, you were a lifesaver.

Kids were successfully dropped off at the childcare that was provided by Dial an Angel, which was a great idea. It was nice to walk kid free for a bit and talk to other adults and network with other bloggers.

At first I did not know where to start. There were a lot people milling about and stalls for the brands that were showcasing their products and services at the brunch. I decided to make my way to all the stalls to get an idea of what they were offering and find out about all their products/services.

The brands at the brunch were: Kmart, Choosi, Mamee, Brauer, Medela, Naty and Optus.

I made my way to Choosi and Mamee before the welcome to all bloggers. We were then seated to listen to the talks by the guest speakers. There were three guest speakers:

The talks were inspiring and made me think that more people needed to give back. Ingrid had suffered tragedy and has managed to rebuild her life, Tracie has built a great corporate career and helps others through programs at schools and overseas, and Elizabeth works at a great company that helps women with corporate attire to gain a job.

I was very taken with the Fitted for Work business. I think helping women in need to get the job is a great idea to support. Fitted for Work help women how are suffering disadvantage get work and keep it. They fit women with appropriate business wear so that women can present well at an interview, also interview coaching is part of the deal.

Since they are a non for profit business they are always looking for money, clothes and anything that you can spare. Do you have a business outfit and accessories that you are not using or don’t want anymore. Is it good quality and in need of a good home? Why not donate it to Fitted for Work.

After the talks, I mingled with other bloggers and saw the other brands, Brauer, Medela, Naty and Optus. I handed out my business cards that magically were delivered by the post man the day before the event, even though they were supposed to come the first week of August. The post man must have known I needed them. Just worked out well.

Lunch was delicious however I thought the kids would be served an appropriate meal for them but they shared what we ate. Since my kids are fussy, it was mini chocolate muffins and the like that got eaten. Mamee had a nice gift bag with their rice treats and the girls nibbled on them after the brunch at the park.

I even got inspired and shared an idea for an existing product of KMart’s. You never know it might be in the works soon and at your shop soon! If it happens will take pictures and let you know it was my idea! J  Well you never know, right?

One thing that was rather sad about the brunch was that my battery on my phone had died. I had no charger on me and of course no iPad or other device. Many stalls were running competitions that required you to take a picture and post to twitter. As I was minus technology I missed out on all this. It made me think that I need to be prepared for Problogger and have all devices charged and ready to go, have my charger with me just in case.

I am also thinking of a better bag to take to the conference at the gold coast as things got lost on the bottom of my hand bag and it was hard to get things out in a hurry. Need to be better organised for next time. What bag do you take to conferences? Do you find it hard to find things in a hurry? Do you have business card holders and if so do they come in handy? I was going to get one but have not had the chance as yet.

Three dial an angel ladies came up to me on separate occasions to say how well behaved my girls were and if we ever needed a babysitter they would love to help me out. That was great news, and they even service the Blue Mountains, so that was good to know.

As this was my first bloggers brunch it was nice to meet bloggers face to face rather than in the virtual world. It was also a bonus to be introduced to such lovely brands and have the opportunity to be considered for brand ambassador or similar.

Things I would do differently: Maybe not have a coffee before a big drive to the city, better bag to find things in, and take my iPhone charger to ensure I might be able to do more at the event.

If you went to the brunch, what were your thoughts? Did you have a good time? Have you been to events like this, and if so what are your tips to make it a successful day?

I am keen to see what the outcome of the brunch will be. If nothing arises, it was nice to be included, have a day out and have fun with my girls.